​A motorized mount with good stability and excellent tracking are essential for deep sky viewing with a camera since exposures will likely be in the range of tens of seconds to more than a minute.   Otherwise the rotation of the earth will cause elongated stars after only a few seconds.    Like the choice of optics, there are many options for mounts that can be used for EAA.  These are the key requirements:
​​ 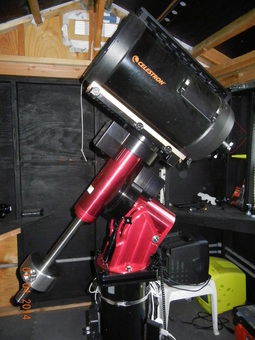 TRACKING
Visual observing is very forgiving of the motion of the sky, but astrophotography and EAA are not.  Tracking is essential because star elongation due to the rotation of the earth is perceptible in a camera image after only a few seconds (see my page on Field Rotation for details).  Assume we are using a camera with 8micron pixels and are trying to image an object at 60 degrees declination.  Using an 8" SCT at f/5 (1000mm focal length), a 1sec exposure produces a star trail 4.6 pixels long on a 1/2" format CCD.  This is enough to create noticeable star trails and cause blurring of the deep sky object.  Even an 80mm f/5 refractor produces a star trail 3.6 pixels long with a 2sec exposure.  Since many exposures will be longer than 5sec, a mount that will track the motion of the stars is an absolute necessity.

GOTO
​    While the GoTo feature is not absolutely essential, it will certainly make it a lot easier to locate and center deep sky objects quickly and allow you to spend more time observing  instead of searching.   This is because a camera provides a small FOV, similar to that of an 6- 8mm EP.  For instance, a camera with a 1/2" CCD on an 8" SCT at f/5 produces a FOV of 16.6 x 22.1 arcmin (28 arcmin diagonal) very close to the 29armin FOV of an 8mm EP with an apparent FOV of 60deg.  This is about the size of the moon.  Cameras with the Sony 1/3" CCDs on the same scope produce an even smaller FOV of 12.6 x 16.8 arcmin (21 arcmin diagonal) which is similar to the FOV of a 6mm EP.  With the recent wave of CMOS cameras like the ASI1600, ASI294 and ASI071 much larger sensors with diagonals of 22.2mm to 28.4mm have become widely popular resulting in much larger FOVs same as the case for 22mm and 28mm EPs.  Still, a GoTo mount will make life much easier. 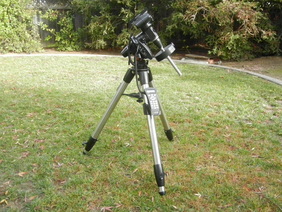 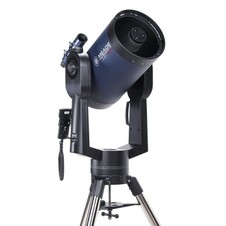 Alt-Az Mounts
Alt-Az mounts are also popular for EAA.  They can be a good starting mount for EAA because of their lower cost and simplicity of setup compared to EQ mounts.  They do not require a polar alignment - in fact they cannot be polar aligned since their axes of rotation are aligned with the local horizon and meridian, not the axis of rotation of the earth (unless at the north or south poles).  This means that the apparent rotation of the sky limits the maximum exposure possible with an Alt-Az mount for live views.   The field rotation rate depends upon the latitude of the observer, as well as, the Azimuth angle and Altitude of the object being observed.   For most North American latitudes it is reasonable to expect to be able to use exposures of 30 seconds or less without noticeable field rotation.   This is long enough to view many deep sky objects of interest.  Exposures longer than that are possible at higher latitudes and/or at certain locations in the sky.  See my page on Field Rotation for more details.

When used with software like the free program Sharpcap which can translate and rotate frames while stacking them live, I have been able to stack frames for more than 5min without any problem with field rotation.  Obviously, the stars will rotate during such long exposures, but the software takes care to adjust each frame so that the images from each frame line up.  You will notice, however, that the edges of the stacked frame will show some black where the images do not all line up.

Another issue with Alt-Az mounts arises when trying to view objects at the zenith.  Because of their design, many cameras are large enough that they will crash into the mount base when the mount points at the zenith.  To avoid this, all but a very few cameras, like the ZWO ASI224, need to be connected to the scope with a diagonal.
​© 2020 Curtis V. Macchioni